Yesterday the folding convention concluded and the class I would like to talk about was the last of the day. I was really taken by the skill and instruction of my teacher, Cheng Herng Yi, a local high school student t a school with a focus in math and science.

The class was simply called, “A simple box,” and as a novice folder with now a handful of days worth of experience, it was refreshing to work on origami that was less complex, but also highly practical for my geometry classroom.

Yi, wearing his polo shirt with the name of his high school was extremely calm and clear in his presentation of the directions. He started the presentation by telling us that he came up with the fold pattern independently based on a well-known folder’s similar shape. Upon further research, he realized that this folder had also developed the pattern that he created. I was extremely impressed that this 17-year-old was developing his own patters, even if they had already been documented by someone else. It seems to me that with practice, many people are able to become proficient at copying existing models. However, to develop your own folding patterns to create something takes more ability and conceptual understanding.

Yi showed us a model of one of his boxes, and then he took it apart into its different pieces. He then unfolded each piece to show us the outline of its folds.

He also drew on the white board what the diagram of the paper looks like folded. He was a very visual teacher, and his instructions were clear and concise. He waited until everyone had reached the same point in folding before moving on. The folds involved in making the “simple box” are not overly difficult, but what was hard was fitting the pieces together so they fit snuggly. 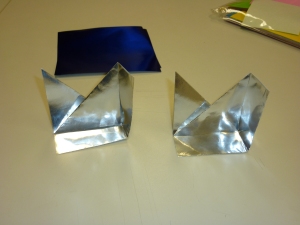 Some pieces of the box

Here I am folding..

Part of my box

This took time, but with other repetitive tasks, it became much easier with practice. We also folded tops to our boxes using paper that was slightly shorter. Overall, it was a great experience, and what was also nice was that the activity lasted about 50 minutes, or time to teach and practice in one school period.

I envision that many of my students will struggle initially with folding because it will be new for most of them. I will start with straightforward activities like examining what happens to a square piece of paper when it is folded by its edges or its vertices. As I mentioned in an earlier post, I can use this activity to teach vocabulary, and it will also be good practice for my students to practice the two most basic folds. During this introduction to folds, I will also review the difference between valley folds and mountain folds (if you put the paper on a table, the paper would prop up and the fold is on top, like the peak of a mountain). The valley fold is the opposite.

The construction of a simple box is a good activity for volume and surface area, and I plan to use it when teaching these concepts.

At the conference and folding convention I bought some books, “Origmics: Mathematical Explorations through Paper Folding,” by Kazuo Haga, and “Origami Games,” by Joel Stern. I also received the names of other Origami books by Tom Hull and Nick Robinson to buy for the development of lesson plans and projects involving origami.

Last night I had dinner with friends of a friend at a sushi restaurant in the basement of a mall that is only about three minutes from my hotel. I had not explored in that direction, and it was surprisingly my first experience in a Singaporean mall. Singapore is known for its malls and shopping, but I have preferred walking around neighborhoods like Little India and Chinatown to malls. I was a little skeptical about a Japanese restaurant in the basement of a mall, but the sushi was good (and cheap) and it made its way around a conveyor belt. There were also sushi chefs taking more specialized orders. Perhaps the biggest quirk of the place was how to order things not on the sushi carousel.

Once you have taken all of the popsicle sticks you want, you give them to the server, who brings your food to the table. A fascinating system. The dinner was good, and it was nice to have a long conversation with locals who have a few years of stories to tell. One story that caught my attention was about a failed plan here many years ago to offer tax relief to married couples who each have college degrees and have a child. On the flip side, apparently there was some sort of incentive for women who did not go to college to be sterilized. Creepy. Anyway, the couple likes living here, and they like the ability to hop on a cheap, short flight to exotic destinations.

Today I had a free day and it rained, so I went to the Asian Civilizations Museum by the river.

Don't worry, they are bronze..

I spent a few hours there learning about different cultures ranging from headhunters on remote islands in Indonesia and the different Chinese dynasties. The museum, on three floors, was impressive, and its collection was varied and interesting.

One of many cool artifacts at Asian Civ Museum

For example, there was a skull that was found on one of the headhunter islands with carvings on it. There were also a lot of interesting weapons, jewelry and statues. I lucked out and latched on to a guided tour when I arrived, and the guide was quite knowledgeable. Singapore is a melting pot of people from all over the region, and it was interesting to hear the stories of why people have come here and where they came from.

At 6 p.m. I met Patsy, who is taking a few of us from the conference on school visits this week. We walked to the Peranakan (means “child of” or “born of” and refers to people of mixed ethnic origins) Museum, but it was closing, so I plan to come back on Wednesday afternoon when there is no school visit. Then we ate dinner at True Blue Cuisine, an authentic Peranakan restaurant across the street. We shared dishes that were spicy and mostly contained shrimp. We had a salad with bananas, a whole fried fish, tender beef, and a pot with chicken and interesting nuts that were stewed and cracked. You scoop out a marrow-like black paste from inside the nut that is quite tasty. Dinner was nice, and we talked about the origami conference and teacher training and education in the United States. Perla, who teaches college math in San Diego, is the only other person attending every school visit this week. Robert Orndorff, whose presentation I attended and who was the instructor for the modular brick class, was also at dinner. Robert and Patsy agreed that one reason they believed that American schools have sometimes struggled with math education is that its teachers are not always mathematicians. I agree with this idea, but in my opinion this will not change until education is valued more in the United States and there is more of an incentive for highly qualified math minds to forego careers in science, business, and engineering (to name a few) and enter the cracked system of public education in America.

Before dinner, Patsy gave us a copy of our schedule for the week. Instead of retyping it, I will paste it below.  I am excited to visit a range of schools that teach students with varying skill levels. It will be helpful to see how algebra and geometry are taught, and it will be nice to visit a primary school (grades 1-6) since I have never observed such a level.

Here is the schedule:

Monday, 19 July: 1. Arrive by 9:30am at Northlight School (http://www.nls.edu.sg/). It is a secondary school, which opened three years ago to accommodate students who struggled during their primary school years. A teacher will demonstrate use of the smart board. 2. Arrive by 2pm at the National Institute of Education (www.nie.edu.sg), the sole teacher preparation institution for the country, to meet with Khoon Yoong WONG, former chair of the mathematics department.

Tuesday, 20 July: Arrive by 9am for all-day visit to Republic Polytechnic (http://www.rp.edu.sg/), which is unique. It its a totally project-based school for students who have completed secondary school. 5:30pm: Opening of iNVENT! Exhibition at Science Centre (are you interested?)

Wednesday, 21 July: Arrive by 9am to Kent Ridge Secondary School (gr. 7-10; http://www.kentridgesec.moe.edu.sg/). It is a neighborhood school. I conducted a lesson study workshop at this school on 3 June. The students are average, with not very high scores on their Primary School Leaving Exam (PSLE, taken at the end of gr. 6, which determines where students are eligible to go for secondary school). Afternoon open.

Thursday, 22 July: Arrive by 7:30am at Catholic High School (http://www.catholichigh.moe.edu.sg/) that is both primary and secondary. Afternoon open.

Friday, 23 July: Arrive by 8:30 am at Tampines Primary School (http://www.tampinespri.net/), which is a school of distinction. I met the principal in 2000 at a mathematics conference in China.

This entry was posted in Uncategorized. Bookmark the permalink.